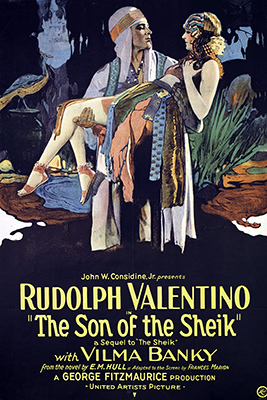 Silent Film Series “THE SON OF THE SHEIK”

Doors: 6:00PM Film: 6:30 Rated: NR
Enjoy a silent film in a restored moviehouse with live musical accompaniment by Jeff Rapsis.
The screen’s original Latin lover in his most famous role, that of Sheik Ahmed Ben Hassad, ruler of a vast desert empire and conqueror of many a woman’s heart. Prepare to swoon! Exotic adventure film that captured the imagination of early movie audiences. Shown in honor of the 96th anniversary of Valentino’s untimely death in August 1926 at age 31. Part of a series of 1926 films that recently entered the public domain.
General admission $10.