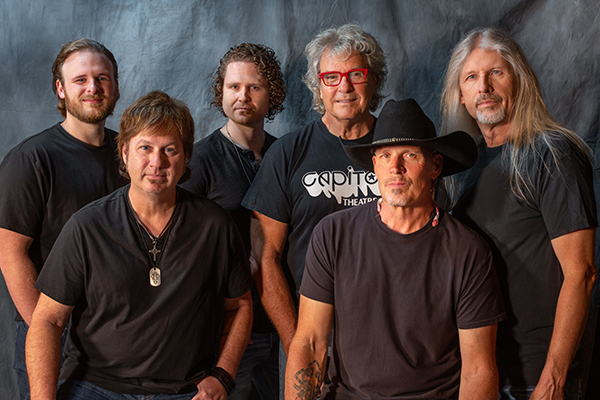 with special guest The Georgia Thunderbolts

For The Outlaws, it’s always been about the music. For more than 40 years, the Southern Rock legends have celebrated triumphs and endured tragedies to remain one of the most influential and best-loved bands of the genre. Today, The Outlaws have returned with new music, new focus and an uncompromising new mission: It’s about a band of brothers bound together by history, harmony and the road. It’s about a group that respects its own legacy while refusing to be defined by its past. But most of all, it’s about pride.

It’s About Pride was also the title of the band’s acclaimed 2012 album, universally hailed as their victorious comeback. “Because The Outlaws had been out of the public eye for so long, it was almost like starting over,” explains founding singer/songwriter/guitarist Henry Paul. “But because of the band’s history, we dig deeper, write better, perform stronger. Everything we do is to reinforce the notion that The Outlaws still matter, and that Southern Rock will always matter. It’s a message we’re proud to bring into the 21st century.”

As live performers, the band burns hotter than ever. “The Outlaws helped define Southern Rock for me and for generations of fans,” wrote music journalist Bill Robinson in The Huffington Post. “Seeing them onstage with The Charlie Daniels Band, Marshall Tucker Band, Allman Brothers, Lynyrd Skynyrd or countless others was, for a long time, one of the best experiences I could have. And so it was again when I saw The Outlaws play recently.” The band’s concerts – vividly captured in their 2016 double album Legacy Live – are blazing 2+ hour tributes to the band’s rich history and fiery rebirth. Classic tracks and fan favorites from the first three albums – as well as The Henry Paul Band’s definitive ‘Grey Ghost’ – share the spotlight with songs from It’s About Pride and 2020’s acclaimed Dixie Highway that have been enthusiastically embraced by audiences. “I think our new material goes back to those three classic Outlaws albums, when the band was proud of its influences from country, blues and jazz,” says Paul. “Plus, Jimmy and Jeff have honored and maybe even stepped up the legacy of ‘The Guitar Army’. Our goal is to unite the fans and bring the band back into the light. It’s about finishing what we started.” For Henry, Dave, Randy, Jimmy, Michael, and Jeff, it’s also about a band of brothers who love playing their own brand of rock, and who 40+ years ago first got the chance to share it with the world.”

For The Outlaws, it’s still about the music. And now more than ever, it’s about pride.

The Georgia Thunderbolts have joined forces with The Outlaws this March to bring fans an extra helping of anthemic riffs, wild harmonicas, and pulse-pounding drums!

Timeless and classic sounds with a modern twist and newer attitudes is how band members describe The Georgia Thunderbolts as they usher in a new generation of classic southern rock steeped in soul and the blues.