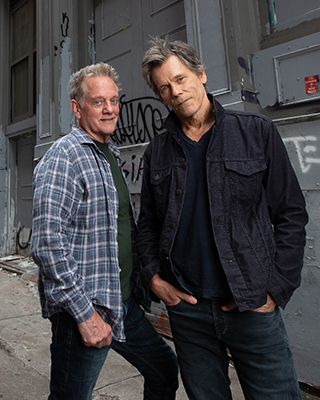 Rescheduled From April 14th. Tickets purchased from the April show are valid for this performance.

To start, let’s dispel a catch-all cliché. Talent and ability don’t necessarily need to be confined to a singular niche or any particular area of expertise. Skills and savvy can cross over as far as creativity is concerned.
Likewise, despite the sometimes fractious relationships that exist between male siblings — witness Ray and Dave Davies of the Kinks, the Everly’s, and that turbulent twosome, Noel and Liam Gallagher of Oasis — the brotherly bond ultimately wins out. Indeed, the ability to find inspiration in a common connection never fails to reap remarkable results.
Michael & Kevin Bacon — A.K.A. The Bacon Brothers — offer an ideal example of what can result when two talented individuals who share the same gene pool expand their horizons, combine their talents and create an inspired sound that stands apart and wholly on its own. With ten albums to their credit, spawned over the course of 23 years, it’s clear their band isn’t simply a sideline that supplements their day jobs. Rather, it’s an ongoing effort that’s been accompanied by commitment and creativity. Granted, Kevin’s an award-winning actor with a lengthy film, stage and television resume, and Michael is an Emmy-winning composer, who honed his craft as a songwriter in Nashville in the 70’s, but when the two pool their talents as The Bacon Brothers, the music rings with a resilience all its own.
PETE KILPATRICK
Maine based singer/songwriter Pete Kilpatrick has released nine studio albums. His most recent record “Songs From The Green Room” was written and recorded at his home during the global shutdown in March and April of 2020. This was Pete’s first experience recording an album from home. His music has been featured on television shows like “The Office,” “Parks and Recreation,” “New Girl” and “Community” and he has shared the stage with artists such as Dave Matthews Band, Guster, Ray Lamontagne and David Gray.